You are at: ALUBRA (Introduction) » About us

Alubra s.r.o. was founded on 2 March 2005 by the merger of two self-employed entrepreneurs, specifically Antonín Bravenec, who operates in metal-working, and Petr Glončák, operating in aluminum wholesale. These two joined their many years of experience in their respective fields. Upon foundations, both of these men worked independently and did not have any employees.

Antonín Bravenec has operated in metal-working since 6 May 1996; during that time he gained the necessary experience in finishing and processing of ferrous and non-ferrous metals. During this time he also cooperated with several partners who, however, did not bring any significant contributions and know-how, which is important for the business, and that is why the cooperation never lasted for long. In 2001 he started his own business and thanks to bringing together more activities, he improved in technological machining processes.

Petr Glončák also started as a self-employed entrepreneur thanks to previous trading experiences. He imported mostly aluminum profiles to the Czech Republic and focused on wholesale of these products. He managed all relations with manufacturers, suppliers and customers on his own. After his business relations expanded, there was an increasing demand from his clients for further finishing and cutting of aluminum profiles. At that time Mr. Glončák started to look for a partner who would help him deal with the growing needs of his customers.

The resulting cooperation of these two entrepreneurs proved to be mutually beneficial and finally ended in a merger that gave rise to Alubra s.r.o. The work on aluminum profiles, as well as completed series, increased as our customers purchased products in Western Europe, i.e., for significantly more money than it cost to produce them here. The quality of aluminum and non-ferrous metal processing was high and the satisfaction of clients resulted in increased demand, which sealed the cooperation between the company founders. After the foundation of Alubra s.r.o., older machine tools started to lag behind the increasing demand, which is why the company started to consider purchasing the first CNC milling center that would increase the company's productivity. The first CNC milling center was purchased in 2005. It represented an important step for the following technological development of the company. At that time the company employed a little over ten employees.

Today the company employs over thirty people and owns twelve state-of-the-art CNC cutting saws. The newest addition to the company's machinery is the professional CNC center that can work on five axes and increases the competitive strength of the company. Alubra s.r.o. is situated in its newly reconstructed headquarters, which it plans to further expand in the future. In March 2015 the company will celebrate its 10th foundation anniversary. 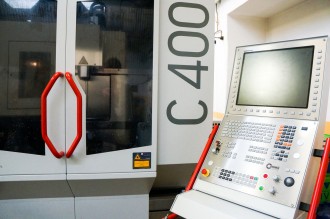 A new milling center with five axes using a built-in tilting table has been added to the machine fleet. This machine allows us to meet the requirements of customers who need to produce parts of more complex shapes. Specifically, this is the high-quality HERMLE C 400 center.